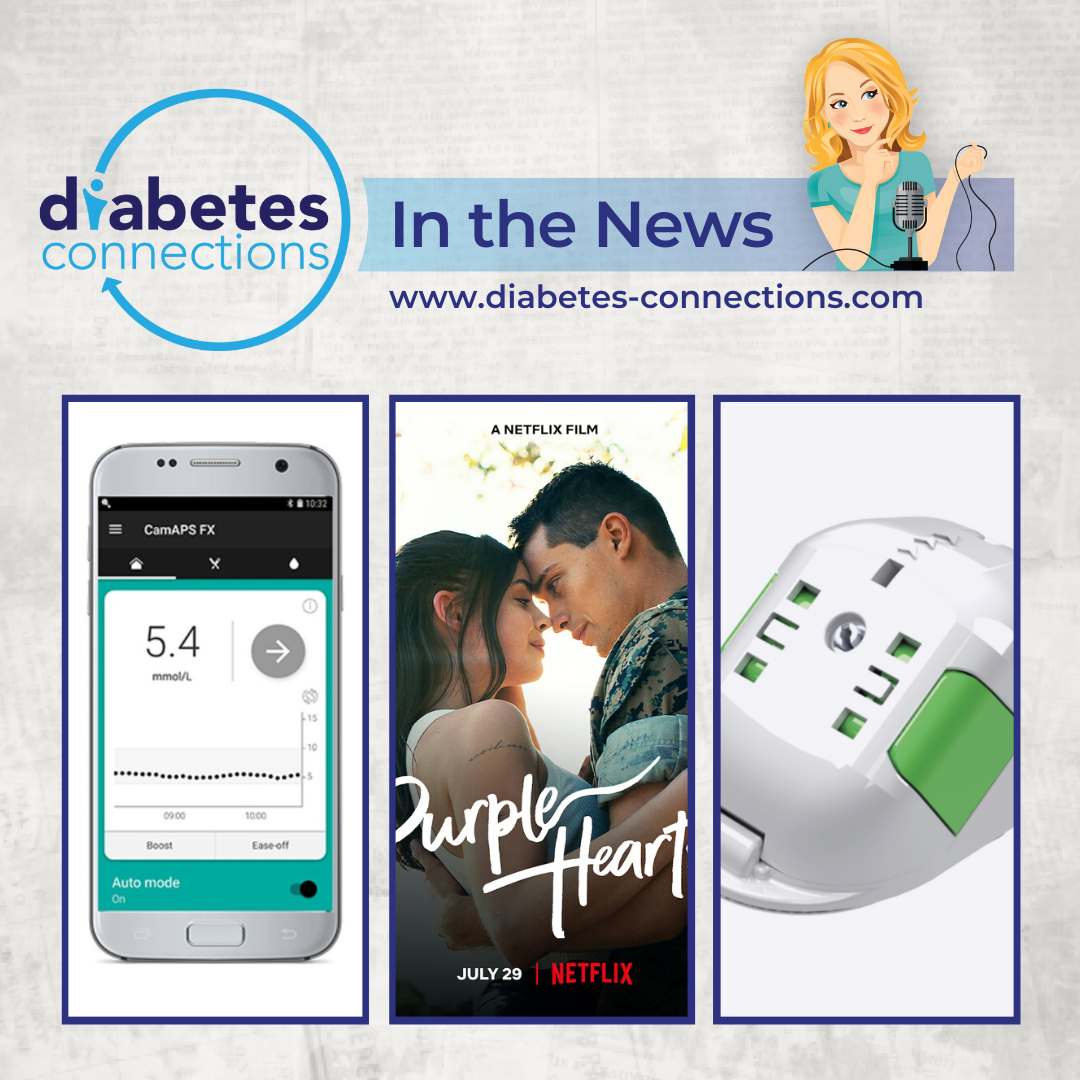 It’s In the News! The tops diabetes stories this week include: Australian scientists say they have a new way to restore insulin production using an existing and approved drug, Tandem rolls out bolus by phone for wider release and acquires Capillary Biomedical, an infusion set maker. Dexcom adds Spanish as a language option for the G6, a necklace is said to be able to monitor glucose levels and Netflix’s Purple Hearts focuses on type 1 medical costs as a plot point.

Episode Transcription Below (or coming soon!)

Hello and welcome to Diabetes Connections In the News! I’m Stacey Simms and these are the top diabetes stories and headlines of the past seven days.

In the news is brought to you by T1D Exchange! T1D Exchange is a nonprofit organization dedicated to improving outcomes for the entire T1D population.

Australian scientists say they have a new way to restore insulin

production in pancreatic cells, using a drug that’s already approved for use in humans. In lab experiments on pancreatic stem cells from donors with type 1 diabetes, the team was able to activate them to begin expressing insulin by exposing them to a drug compound known as GSK126. These cells don’t normally produce insulin, but the drug let them functionally step into the shoes of the beta cells that had stopped working. In principle, a single course of this kind of drug over a few days could replace the need for regular insulin shots in diabetics.

The new treatment would work much faster, within a matter of days, and without the need for surgery. But perhaps the biggest advantage is that GSK126 is already approved by the US FDA and elsewhere in the world as a treatment for cancer. Its safety profile is already being assessed in clinical trials, which could reduce hurdles down the road for its use against diabetes.

That said, the scientists caution that it is still very early days. These experiments were conducted on cells in culture – not even in animals yet – so there’s still plenty of work to do. Nevertheless, it remains an intriguing new possible tool.

Couple of big announcements from Tandem Diabetes this week. They’ve widened the roll out of their Mobile Bolus feature, now open to all customers with in-warranty tslim x2 pumps and compatible smart phones. Approved earlier this year, it has been available for a few weeks to a small group of users.

Dexcom is launching their G6 mobile app in Spanish. It is estimated that 11.8% of U.S. Latino adults have diagnosed diabetes. Dexcom says, “

“Launching the Dexcom G6 app in Spanish is a positive step toward improving health equity for individuals with diabetes who primarily speak Spanish.” To access the Dexcom G6 mobile app in Spanish, users need to install the latest version of the app and set their compatible iOS (v1.10.1) or Android (v1.10.0) smartphone* language to Spanish (any dialect/region). The app will automatically display in Spanish as long as the phone language is set to Spanish.

Big issue for a diabetes app in the UK. CamAps FX is an automated insulin delivery system that works with Dexcom and Tandem. But Google has blocked it from the Play Store and won’t let it send text message alerts. Camdiab, the company behind it, is having to send the messages via another service and pay for each one individually.

Google said it doesn’t allow any apps, other than the designated text message app on a device, to send SMS messages. CamAps FX spent 15 years in development by experts at Cambridge University and was the first system of its kind to be recommended by the NHS for use by children from the age of one, and pregnant people. We’ll see if the court of public opinion has any sway on what happens here.

Should we get excited about a new smart necklace said to measure glucose in sweat? Ohio State University recently presented the necklace, which has a clasp and pendant with biochemical sensors installed on the back so that when placed around the neck, it could capture the sweat and analyze glucose, serotonin, sodium, potassium, and hydrogen levels. In one experiment where people cycled  and drank sugary drinks, the sweat measured the increased glucose levels with a 98.9% accuracy. They didn’t really say what that means, though. Long way to go here but interesting idea.

The T1D Exchange Registry is a research study conducted online over time, designed to foster innovation and improve the lives of people with T1D. The platform is open to both adults and children with T1D living in the U.S. Personal information remains confidential and participation is fully voluntary. Once enrolled, participants will complete annual surveys and have the opportunity to sign up for other studies on specific topics related to T1D. The registry aims to improve knowledge of T1D, accelerate the discovery and development of new treatments and technologies, and generate evidence to support policy or insurance changes that help the T1D community. By sharing opinions, experiences and data, patients can help advance meaningful T1D treatment, care and policy.

The registry is now available on the T1D Exchange website and is simple to navigate, mobile and user-friendly. For more information or to register, go to www.t1dregistry.org/stacey

A new Netflix movie featuring type 1 is getting a lot of attention: Called Purple Hearts, it tells the story of Aspiring singer-songwriter Cassie Salazar (Sofia Carson). The synopsis says: Chasing her dreams isn’t exactly easy when she’s juggling multiple jobs and trying to keep her Type I diabetes at bay. Raised by an immigrant single mother and navigating a cruel health-care system, Cassie has seen how the “Land of the Free” has been everything but for people like her. After learning that Marine spouses get full health benefits and extra pay, Cassie comes up with an idea to marry one. Although the marriage is temporary, their true feelings for each other are revealed when an unexpected tragedy sends her now husband home earlier than expected.

I’ve reached out to the film makers. We’ll see if this one gets type 1 right.. but it sounds like they understand some of the health care system.

Next week I’m talking to Jeff Ryan, who was diagnosed with type 1 as a little kid back in 1971. He also lives with an essential tremor, and was one of the first people to have brain surgery for it. Which was very successful.

The long format episode out right now is with Sebastien Sassville who tals about completed the race across America – a coast to coast cycling race in just 12 days.

Listen wherever you get your podcasts

That’s In the News for this week.. if you like it, please share it! Thanks for joining me! See you back here soon.