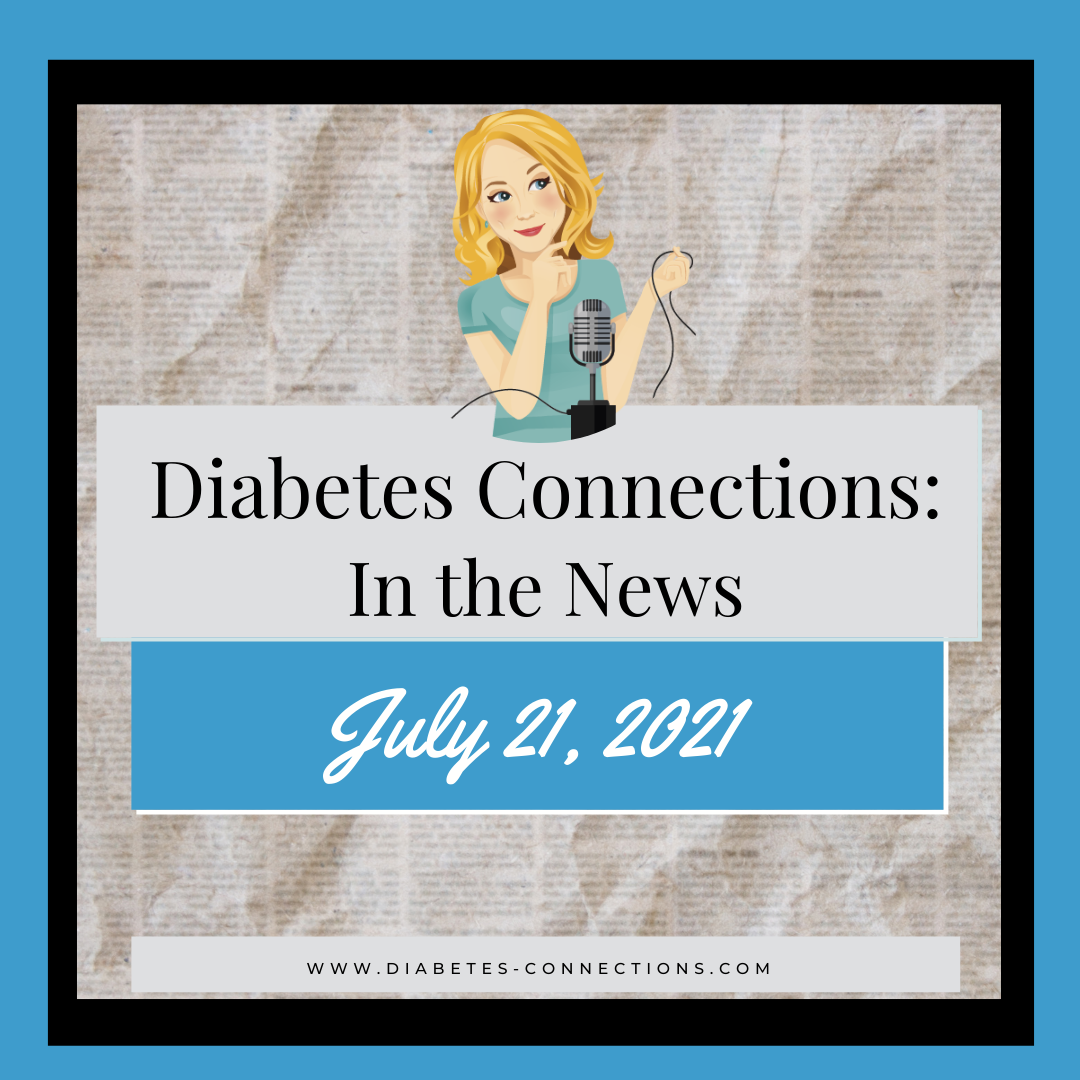 
It’s “In the News…” the only LIVE diabetes newscast! Our top stories this week:  Oral meds to prevent T1D move ahead, racial disparity in peds CGM use, what that Dexcom API news means, a new study with teens and Control IQ and a summer olympian talks about her recent T1D diagnosis.
Join Stacey live on Facebook each Wednesday at 4:30pm EDT!

Hello and welcome to Diabetes Connections In the News! I’m Stacey Simms and these are the top diabetes stories and headlines of the past seven days.  As always, I’m going to link up my sources in the Facebook comments – where we are live – and in the show notes at d-c dot com when this airs as a podcast.. so you can read more when you have the time.

Our top story.. A new oral drug to prevent type 1 is moving along in trials. Right now it’s called IMT-002 – and put very simply – it’s meant to block a genetic trait that increases the risk for the disease and is seen in a majority of patients.

It’s a new way to think about treating type 1 – phase two studies could start next year. It’s thought that this could help with other auto-immune diseases as well.. the next condition these researchers want to tackle is celiac.

Could the global rise in diabetes have an environmental component? In an Advances in Pharmacology article, researchers say routine exposure to chemicals that disrupt our endocrine systems play a role in triggering diabetes.

These researchers say “We often attribute patient’s disease risk to individual choices, and we don’t necessarily think about how systems and environments play into disease risk,” They go on to say so-called lifestyle factors like exercise and diet fail to fully account for “the dramatic rise and spread” of diabetes.

A new study shows Black children less likely to start or continue with a CGM after a type 1 diabetes diagnosis. These researchers at Children’s Hospital of Philadelphia or CHOP as it’s commonly known, show that a racial-ethnic disparity in CGM use begins within the first of year after diagnosis.

These researchers say social determinants including structural racism, are likely playing a role in disparities in care and outcomes

Very large survey of women shows that half of those with type 1 or type 2 diabetes are not getting pre-pregnancy counseling. This study included more than 100-thousand women. Right now guidelines from many groups including the CDC and American Diabetes Association recommend providers offer women with diabetes health counseling before pregnancy to cut down on the increased maternal and infant risk associated with both conditions. These researchers hope to develop better tools for women & their doctors.

Big increase for time in range when kids use hybrid closed loop systems. We’ve heard about a lot of improvement, but in this study, the percentage of kids and teens with t1d spending at least 70% time in range… more than doubled after 3 months of using Tandem’s Control IQ system. This was a study of about 200 kids, median age was 14, and it was a real world study – where the kids went about their lives, not in a clinical setting, and the researchers pulled the data electronically.

Interestingly, sleep mode use increased through 6 months, while the exercise mode was used less over time.

Kids with an A1C over 9 saw the most improvement. Those with an A1C under 7 didn’t see much of a change.

Dexcom gets FDA clearance for real time APIs.. what does that mean? Third party companies like Fitbit or Sugarmate which have long integrated Dexcom data have been doing so on a bit of a delay. Now they can do so in real time.

API stands for Application Programming Interface, which is a software intermediary that allows two applications to talk to each other.

Dexcom’s Partner Web APIs will allow users to view all of their diabetes care data in one place to enable in-the-moment feedback and adjustments, the company said in the announcement.

Cool new exhibit at Banting House – recent guests of the podcast and museum celebrating the birthplace of insulin.

They’re set to open up again this week – the first time since March 2020 – and there’s a new computer generated exhibit. It does work outside.. In the square where Dr. Banting’s statue stands. Giving visitors a virtual glimpse at the life and work of the man credited for the discovery of insulin. If you haven’t visited – it’s in Canada – or seen the museum, I highly recommend a spin around the website, we’ll link it up.

Summer Olympics are kicking off and by now you’ve probably heard that American trampoline gymnast Charlotte Drury was just recently diagnosed. She found out she had type 1 weeks before the 2021 Olympic qualifying trials, she revealed on Instagram last week. she and her coach pressed on and she basically got back into things within three weeks. She posted this photo of herself wearing the Dexcom. Drury is the first American woman to win a gold medal in trampoline at a World Cup

That’s Diabetes Connections – In the News.  If you like it, share it. And feel free to send me your news tips. Stacey @ diabetes dash connections dot com.

Please join me wherever you get podcasts for our next episode -Tuesday –  I’ll share my conversation with Gold Medal Olympian Gary Hall Jr – when he was diagnosed in 1999 he was told to give up swimming. He didn’t and he talks about why.. and how he overcame what was conventional wisdom for athletes at the time. This week’s show is the story of Jack Tierney, diagnosed in 1959 with type 1 he’s 81 and he says he’s never felt better.

Thanks and I’ll see you soon