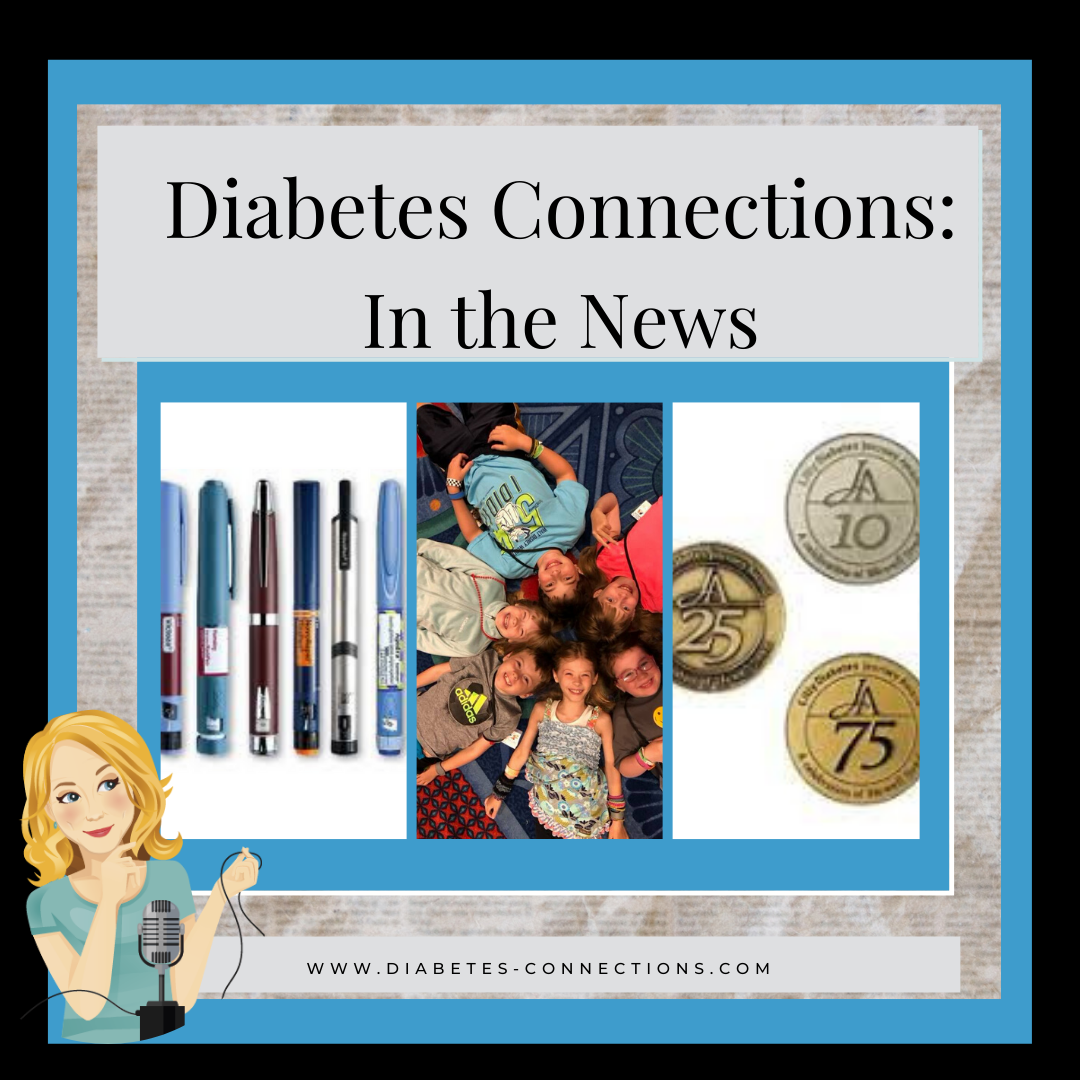 In the News… top stories this week: A second glucose-regulating molecule discovered, CGM use closer to diagnosis helps T1D kids, Lilly discontinues “Journey Awards,” study on Dexcom use in hospitals, and why does this concept car share a diabetes tech name?
—
Join us LIVE every Wednesday at 4:30pm EST

Hello and welcome to Diabetes Connections In the News! I’m Stacey Simms and these are the top diabetes stories and headlines of the past seven days. All sources linked up on our Facebook Page and at Diabetes-Connections dot com when this airs as a podcast.

In the News is brought to you by The World’s Worst Diabetes Mom, Real life stories of raising a child with diabetes. Winner of the American Book Fest Prize for best new non-fiction. Available in paperback, on Kindle or as an audio book – all at Amazon.com.

Our top story.. You know insulin helps regulate blood glucose. Now scientists have discovered a second molecule in the body that seems to do the same thing. It’s produced by fat tissue but uses a different molecular pathway.. so it’s hopeful this could get around insulin resistance. These scientists say the hormone, called F-G-F-1 suppresses breakdown of fat cells into free fatty acids and regulates the production of glucose in the liver. Because it does this in a different way from insulin, they’re calling it a second loop. Very early here but very intriguing.

New study out of Stanford says setting children and teens up with a CGM shortly after a T1D diagnosis.. results in a lower A1C a year later. They looked at kids diagnosed in 2018 to 2020… and compared that group to other children diagnosed four years earlier. In that first group, about 90-percent started CGM in the first month.. in second group it was under 2-percent that started that early.  At diagnosis, the children in the newer cohort had higher A1c s. At 6 months and 12 months after diagnosis, the patients in the new cohort had significantly lower A1Cs than the other kids. These researchers say the news is more evidence to get insurers to cover the devices.

A new risk factor for type 2 mostly affects women, and it’s in about 10-percent of the population. A new study says about one in 10 adults has a lump in their adrenal glands that, though otherwise harmless, increases production of certain hormones that increase the risk for Type 2 and high blood pressure. About 70% of those with them were women, most of whom were 50 years old or older. It’s called mild autonomous cortisol secretion and these researchers say we should start screening for it.

After almost 50 years of honoring people with diabetes with anniversary medals, Lilly Diabetes is phasing out the Journey Awards. Awards were given to patients for 10, 25, 50 and 75 years. A Lilly spokesperson confirmed the news to me today.. saying “We periodically need to re-assess and prioritize programs as the environment and our business shifts. We believe our decision will allow us to focus on programs that we hope bring the most value to people living with diabetes.” They encourage people to check out the Joslin Medalist program and I’ll link that up.

Movement on a couple of court cases involving insulin makers. Sanofi lost its appeals court bid to revive patents on Lantus. You’ll recall that last year, Viatris got approval for Semglee, it’s long-acting insulin, which is basically the same thing and is approved for the same indications as Lantus. Sanofi is facing an antitrust lawsuit accusing it of obtaining some 20 patents in an effort to delay competition. Viatris has been knocking out the patents in court.

A federal judge has pared down a class action lawsuit accusing the biggest insulin makers of racketeering. Novo Nordisk, Sanofi and Eli Lilly  are accused of scheming together to inflate prices. However, the US District Judge ruled that claims under the racketeering laws of several states (except for Arizona’s) must be dismissed… because the laws do not allow claims by plaintiffs who bought the drugs through intermediaries, such as insurance companies, rather than from the drugmakers directly. The same judge did allow these RICO claims to proceed earlier this year in a separate class action against the companies brought by direct purchasers.

New look at CGM accuracy in hospitals, mostly for people with type 2. This study looked at the Dexcom G6 and didn’t measure how it influenced care, just whether the readings were accurate compared to finger sticks.  As you’d imagine, the readings were less accurate at the extreme highs and lows, but the researchers concluded CGM technology is a reliable tool for hospital use. The FDA allowed expanded Dexcom use in hospitals less than two years ago, so this is still very new.

Dexcom partners with another new company.. this one is called SNAQ.  Snaq is a diabetes app that is designed to track both your diet and your blood glucose… and can give you nutritional info of your food just by taking a photo with your smart phone. Good write up & review on that  from Diabetes Daily which I’ll link up. Apparently, it works pretty well! The partnership means all US based SNAQ users can automatically view Dexcom CGM Data together with their meals inside the Snaq App

Hat tip to our friend Nerdabetic who spotted this ridiculous story. LG Electronics introduced a new in-vehicle infotainment concept tailored to autonomous vehicles. It’s designed to blur the distinction between home and car .. This is a car cabin that can turn into a space where passengers work, watch TV, exercise or experience camping virtually. The name? LG Omnipod

It was presented at the Consumer Electronics Show this week. No comment yet from Insulet, the makers of the Omnipod with which most of us are already familiar.

Before I let you go, a reminder that the podcast this week is all about diabetes in media, a really deep dive into how representation on screen influences those watching. Listen wherever you get your podcasts or if you’re listening to this as on a podcast app, just go back an episode.

Next week’s episode will be a little bit delayed.. released either very late Tuesday evening or early Wednesday morning. I’m set to talk to the CEO of Dexcom on Tuesday and I want to get that to you as soon as I can.. rather than hold it. So thanks for your patience on that.

That’s In the News for this week.. if you like it, please share it! Thanks for joining me! See you back here soon.