In the News… Insulin pricing bill, Nasal insulin tested, Light at night as a T2D risk, and more! 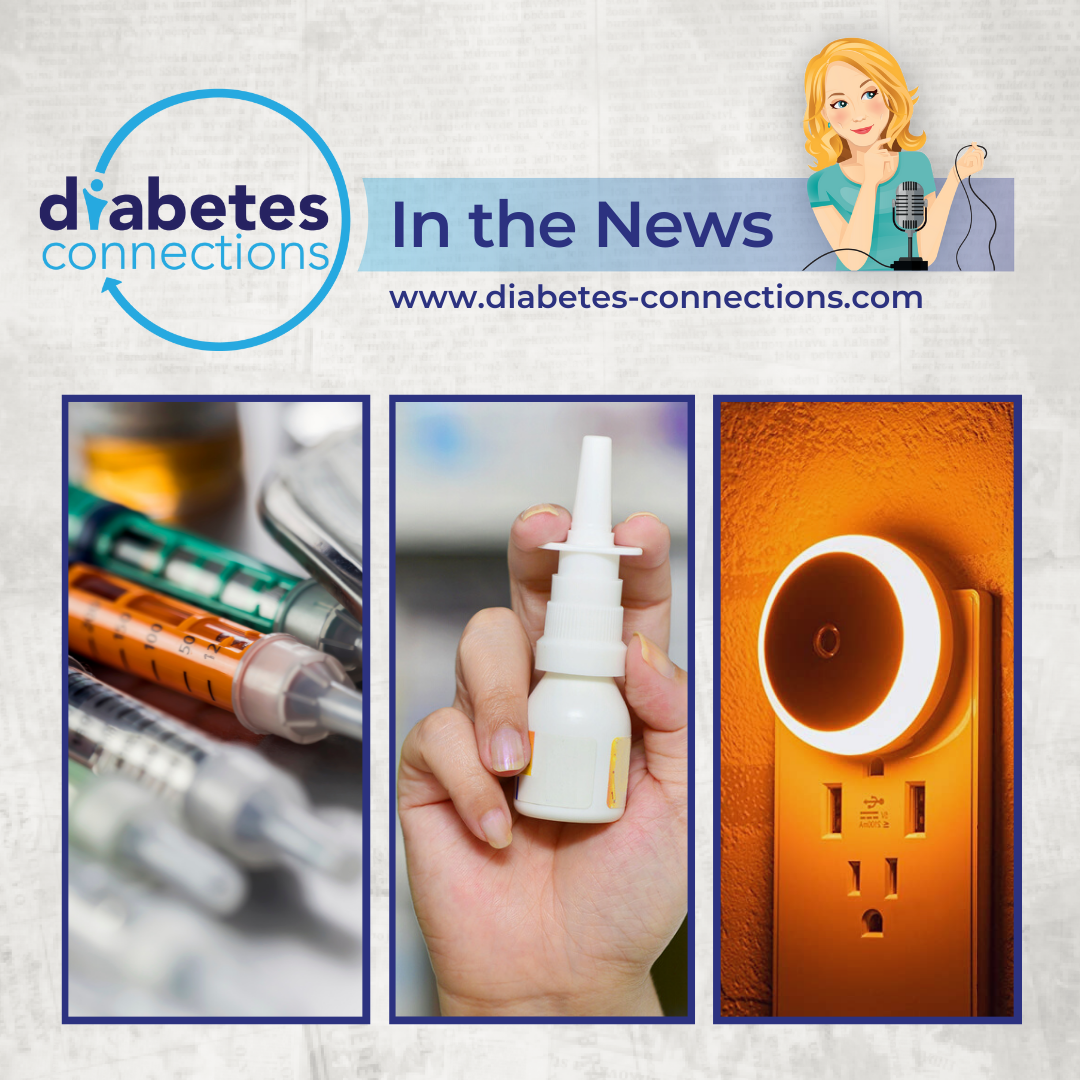 It’s “In the News..” got a few minutes? Get caught up! Top stories this week: The US Senate may have a bipartisan plan to lower the price of insulin for the insured, nasal insulin is tested to reduce the risk of Alzheimer’s in people with diabetes, two interesting studies about sleep and diabetes, and more!

Episode Transcription Below (or coming soon!)

Hello and welcome to Diabetes Connections In the News! I’m Stacey Simms and these are the top diabetes stories and headlines of the past seven days.
XX
In the news is brought to you by T1D Exchange! T1D Exchange is a nonprofit organization dedicated to improving outcomes for the entire T1D population.

XX
Two Senators have unveiled legislation aimed at lowering the cost of insulin, but not for the uninsured. This is a bipartisan bill that would lower patietn’s cost to 35-dollars a month, for those with commercial insurance and on Medicare. It would eliminate the rebates drug companies pay to negotiators known as pharmacy benefit managers if the drug company kept the overall price of insulin below a certain level. Democrats are also in the midst of talks on a party-line package on President Biden’s economic agenda that would likely include reductions in insulin costs as well as broader measures aimed at lowering drug prices, which could complicate any push for a stand-alone insulin measure. This change has enormous support among Americans, but can’t seem to get any real traction in Washington despite who’s in power. We’ll see what happens..

XX
Nasal insulin doesn’t look like it works too well on diabetes, but a new study shows it may help to slow age related mental decline. This study found that after 12 months of once daily intranasal insulin, people with diabetes in the study performed better on cognitive tests than those diabetics in the placebo group. The non-diabetic group receiving the intranasal insulin also displayed improvements on decision making and verbal memory tests compared to non-diabetics in the placebo group.
The biggest improvements in the non-diabetic group were seen in those subjects who started the trial in a prediabetic state. This suggests the treatment may be most effective at slowing cognitive decline in either diabetics or those with prediabetes.
https://newatlas.com/health-wellbeing/insulin-nasal-spray-cognitive-decline-dementia-clinical-trial/
XX
Go to sleep, and don’t breathe too much. Researchers in the U.K. will test hypoxia to treat type 2 diabetes. Hypoxia is a state where the body does not receive sufficient amounts of oxygen.

Multiple studies have shown that hypoxia improves blood sugar levels and aids in weight loss. Although scientists do not fully understand how this works, it is suggested that hypoxia burns more calories in the body, resulting in lower appetites in individuals. These researchers want to recruit volunteers so they can figure out why. Each volunteer will be provided with a sleeping tent in which they have to sleep – at home – for 10-day periods on two separate occasions. For one of they nights, they oxygen levels will be set to 15 percent. That sounds ridiculous, but, the air we breathe right now is only about 21% oxygen. 15-percent is pretty typical for find at high altitudes or inside an airplane.
https://interestingengineering.com/lose-weight-while-asleep
XX
Another look at sleeping and type 2.. an exposure to light may increase the risk. Big sleep study at Northwestern University found that exposure to any amount of light during the sleep period was correlated with the higher prevalence of diabetes, obesity and hypertension in both older men and women. A study published earlier this year by the same team found for healthy adults in their 20s. Sleeping for only one night with a dim light, such as a TV set with the sound off, raised the blood sugar and heart rate.
An elevated heart rate at night has been shown in prior studies to be a risk factor for future heart disease and early death, while higher blood sugar levels are a sign of insulin resistance, which can ultimately lead to type 2 diabetes.
Instead of pulling people into a sleep lab, the new study used a real-world setting. Researchers gave 552 men and women between the ages of 63 and 84 an actigraph, a small device worn like a wristwatch that measures sleep cycles, average movement and light exposure.
Fewer than half of the adults in the study got five hours of darkness at night.
those who had higher amounts of light at night were also the most likely to have diabetes, obesity or hypertension.”
Strategies for reducing light levels at night include positioning your bed away from windows or using light-blocking window shades. Don’t charge laptops and cellphones in your bedroom where melatonin-altering blue light can disrupt your sleep. If low levels of light persist, try a sleep mask to shelter your eyes.
In that case, consider using nightlights positioned very low to the ground, and choose lights with an amber or red color. That spectrum of light has a longer wavelength, and is less intrusive and disruptive to our circadian rhythm, or body clock, than shorter wavelengths such as blue light.

https://www.cnn.com/2022/06/22/health/light-exposure-sleep-study-wellness/index.html
XX
https://medicalxpress.com/news/2022-06-reveals-key-diabetes-drug-nature.htmlXX
XX
Nice story out of Kansas City where Chiefs offensive tackle Orlando Brown Jr. publicly enrolled himself in a TrialNet study. His brother lives with type 1 and his father died of DKA without knowing he had diabetes. Brown said he hopes participating in the trial will help others while helping himself and his family.

https://www.kshb.com/sports/chiefs-orlando-brown-jr-enrolls-in-trialnet-study-for-type-1-diabetes
XX
Right back to the news in a moment but first As I mentioned, The T1D Exchange Registry is an online research study, designed to harness the power of individuals with type 1 diabetes. It’s a research study conducted online over time, designed to foster innovation and improve the lives of people with T1D. Personal information remains confidential and participation is fully voluntary. Once enrolled, participants will complete annual surveys and have the opportunity to sign up for other studies on specific topics related to T1D. By sharing opinions, experiences and data, patients can help advance meaningful T1D treatment, care and policy Sign up at T1DExchange.org slash Stacey (that’s S-T-A-C-E-Y).
XX
Congrats to the great team of Ginger Vieira and Mike Lawson on their newest book. Ain’t Gonna Hide My T1D. Sherry the Sheep loves to draw and play basketball, but she’s worried about what her friends will think if they see her insulin & CGM. Ginger and Mike are long time advocates who both live with type 1. This is their 3rd children’s book together and I think they do a great job of balancing fun and education.

XX
And finally, The Human Trial premieres this weekend. This is a documentary all about stem cell transplantation as a functional cure for type 1. I first spoke to the people behind this film back in 2016 when they were well underway. The movie follows the first two patients in the Viacyte trials. You can host your own screening.. I’ll link up more information – as I do with all of these stories – in the show notes.
XX
And.. The Human Trial will be subject of next week’s long format show. My interview with Lisa Hepner is a follow up to the one six years ago when we first discussed this project. We go into the details of stem cell research, what changed and what she’s seen behind the scenes. The current long-format episode out now is all about Skirt My Pump, an ingenious idea from a women who’s lived with type 1 for 40 years and got fed up with figuring out where to put her pump.
Listen wherever you get your podcasts
That’s In the News for this week.. if you like it, please share it! Thanks for joining me! See you back here soon.